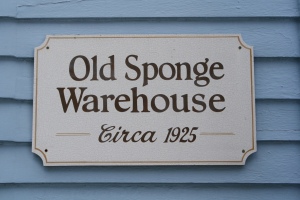 The sponges were first found on beach shores after storms and used for domestic purposes only long before the selling & warehousing of this sea-soft absorbent wonder. In 1849 a small shipment of sponges were shipped to New York where they quickly sold out and the business exploded thereon for decades to come. At one time nearly 100% of sponges in the USA came from Key West and its 350 ship fleet & 1,400 local workers. Though the industry faded into history along with turtle harvesting, with the help of the Civil Works Administration sponging resurfaced during the depression era (1930’s) but never regained prominence as a principle industry. Here at the Old Sponge Warehouse is where the sea harvest was stored during the industries short-lived revival.

The can’t miss aqua 2-story building now stands among newer homes on either side of it but can be distinguished by its own sign as seen in the photo to the left. Key West’s Old Sponge Warehouse can be found near the corners of  James Street & Margaret Street just 2 blocks east of Harbor Walk.