Going Down The Lazy River

Whether it’s kayaking or canoeing you’re into really doesn’t matter because this place has them both!

Seen in the featured photo is another photo, not quite sure where it is… but I know it’s not of the Florida Keys since we don’t have any mountains! 🙂 In the picture below, the colored canoes & kayaks make a great rainbow-type photo with someone from your group kneeling beside or behind them. I didn’t get the exact price to rent either but assure you all they’re not free. 🙂

You can find these kayaks & canoes and other day-long activities all over the John Pennekamp State Park on US-1 at Mile Marker 102.3 oceanside across the street from the CASTLE… you’ll know what I mean once you see it! The park does change an entrance fee per car’s occupants… if I recall, maybe the $3 to $4 range. The park is so well worth the price, bring a picnic and make a day of it, there’s that much here to do!

AWESOME SIGN! Sometimes humor can be found in the most unlikely places. This church parking lot sign is nothing less than Heaven sent for a ‘365 Days’ blog. ‘Thou Shalt Not Park Here’ is yet another perfect example of why we drive in and around church parking lots. Church is one of the last places that you’d expect to find humor and yet one of the most appreciated.

This humorous sign can be found at Mile Marker 90 oceanside of US-1 exactly next to the Coral Shores High School in Tavernier at the Coral Isles United Church Of Christ.

Beach Picnic With A View To Die For! 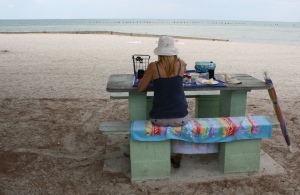 Though every beach has an ocean view, the type of view is up to you in where you chose to get comfy at. Few times are you able to enjoy such splendor, serenity, peacefulness and seclusion as we did on this given day!

Here at the busiest beach in Key West we were alone in our view of the Atlantic Ocean. After our customary bike ride around town, we chose here for a picnic (notice our bike basket doubling as a picnic basket)… and what a GREAT choice it proved to be. Though we weren’t the only ones on the beach, we were the only ones in the view of our picnic table towards the ocean.

Life is good down here in Key West, days like this just make me love this place even more. What a view and fantastic picnic we had! You too can find your picnic spot here at Higgs Beach on the southeastern portion of the island… though I can’t guarantee that you’ll be the only ones there as we were!

Voted BEST EVER Southernmost Sign In The Florida Keys!

Hands down the BEST ‘Southernmost Sign’ EVER in the entire Florida Keys!

OK, I must admit that I was the ONLY judge voting for the ‘Southernmost Sign’ crown and here it is! 🙂 This colorful very large KOA Campground sign is indeed the best of the best ones out there… and I’ve seen dozens.

You can find this BEST Southernmost Sign EVER and photo-op bench just off of US-1 South at Mile Marker 20.0 oceanside. Turn onto road 939B and head into the KOA Kampground finding the sign directly upon entering the campsite.

Say ‘Hello’ to one the Florida Key’s coolest murals!

Seen here is a beautiful great addition to the growing tradition of painted murals throughout the entire Keys. This is indeed a bright spot along your journey and caught my attention instantly upon passing this eye-popping two-walled painted masterpiece. Its focal point is the former majestic now crumbling Bahia Honda bridge along with an iguana, sunset, bicycle rider, mangrove root tree & palm tree.

You can find the one of the Key’s brightest colorful murals at Mile Marker 48.0 bayside beside the enormous Bluegreen Resort.

This is without a doubt Monroe County’s SMALLEST Bird Sanctuary! Featured below is a full-width photo of the sanctuary consisting of a circle of trees with two inner pier posts roped together. Forgetting to bring my trusty bright yellow Stanley tape measure, I’d venture to say that it’s less than 100 feet in width or length… if not smaller. 🙂

Though I didn’t actually see any birds, I did see enormous amounts of bird & pelican poop… some of which I kept as souvenirs upon my sneakers! 🙂 On the other hand, for you ant farm enthusiasts… I’ve found your mecca! 🙂

Monroe County’s SMALLEST Bird Sanctuary is located within a park across from both the majestic White Street Pier and Key West Wildlife Center. It sits on the corner of White Street & Casa Marina Court here on Key West’s less traveled southeastern portion of the island.

In the city of Marathon heading south on US-1 at Mile Marker 52.7 on the left side of the road you’ll find a strange set of aqua colored dome homes & buildings.

These odd shaped abodes are now a Pool Supply Company and formerly a Real Estate Office in prior years. I actually stopped in and spoke with the current occupant quizzing him on its unique style and history. In asking if I could walk around the property and take some photos he replied “If you want to!” so I did and enjoyed it.

If there’s one thing about me you’ll soon find out it’s that “I’m NOT SHY at all!” After all, the worst they can do is say “NO!” I’ve ridden in Barney Fief’s TV show police car, had a guided tour of the Presidential Train & allowed to stroll through Chicago Cubs baseball stadium completely alone for 5 minutes to take photos simply by asking! Oh yeah, that advice is free, YOU’LL RECEIVE NO BILL! 🙂

I know, you’re saying that Captain James Hook is a fictional character in the movie Peter Pan. The character is a pirate captain of the brig Jolly Roger, and lord of the fairy-tale village of Neverland… hmm, I thought that was Michael Jackson! 🙂 His name plays on the iron hook replacing his right hand, cut off by Peter Pan and eaten by a crocodile.

You can find Key West’s REAL Capt. Hook (fishing boat captain) at the Key West City Marina at the Palm Avenue Causeway on the northwest portion of the island. Enjoy the view and many other sights here… all of which are FREE for your vacation consumption.

This is WAY TOO COOL!

Founded in 1891 this former bank at the corner of Duval Street & Front Street in Key West is nothing less than a delight for the eyes. Sitting on the corner and coming to a point, this tan and brown brick mosaic eye-candy is impossible to miss nor do you want to. Take special notice of the balcony along the Duval Street side seen below. The balcony support system is lined with stylish gingerbread reminiscent of this towns pirate past.

The Wachovia Bank that occupied this facility has long since moved yet retained its name as the Wachovia Center. Now housing a Cafe, Jeweler, Art Gallery, Souvenir shop along with its most prevalent lessee the world-famous Ripley’s Believe It or Not! The souvenir shop located in the pointed corner contains a unique surprise.

Walking inside tucked neatly between the T-shirts selection and wall placards stands the banks old vault (pictured below). It remains open during the day for curious visitors like myself to view and photograph. On the upper portion face of the vault door is painted “Wachovia Key West” as the jail house type entrance behind the door guards the empty vault filled only with memories from its rich and glorious past. This tidbit is FREE to browse and worth a visit… face it, when you’re in Key West you’ll end up passing it a number of times on your trip down here to paradise anyways.

Being the history buff that I am, I’m constantly looking at street names trying to find references to the past. The pirate Calico Jack Circle street name is surrounded by an “A” list of other famous pirate street signs in every direction. Here’s more than you’ve ever wanted to know about his pirate past. 🙂

Born John Rackham December 26, 1682 commonly known as Calico Jack, was an English pirate captain operating in the Bahamas and in Cuba during the early 18th century. His nickname derived from the calico clothing he wore, while Jack is a diminutive of “John.”

Active towards the end (1718–20) of the “golden age of piracy” (1650–1730) Rackham is most remembered for two things: the design of his Jolly Roger flag, a skull with crossed swords, which contributed to the popularization of the design; and for having two female crew members, Mary Read and Rackham’s lover Anne Bonny.

Rackham cruised the Leeward Islands, Jamaica Channel, andWindward Passage. He accepted a pardon some time in 1719 and moved to New Providence, where he met Anne Bonny, who at the time was married to James Bonny. When Rackham returned to piracy in 1720 by stealing a British sloop, Bonny joined him. Their new crew included Mary Read. After a short run he was captured by pirate hunter Jonathan Barnet in 1720, before being hanged November 18 of the same year in Port Royal, Jamaica.

To find this pirate legends name blazing upon a street sign, on US-1 go to Mile Marker 23.o oceanside turning onto Spanish Main Drive. Just keep driving down till seeing Calico Jack Circle on your right.